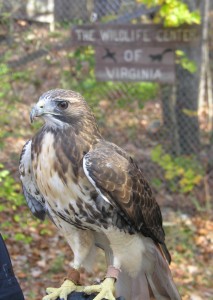 The Wildlife Center of Virginia announced today that their newest animal ambassador — a beautiful Red-tailed Hawk — has been named RUBY!

Ruby was the top vote-getter in the Wildlife Center’s online “Name The Hawk” contest. Although, many votes were disqualified because of cheating and “robo-voting”, the honest votes were tallied and Ruby came out on top.

Ruby was a name suggested by a local First Grade class to honor Ruby Bridges, the civil rights pioneer who in 1960 entered an all-white elementary school in New Orleans and helped lead the city into the age of desegregation. Her bravery was a touchstone in the national effort to bring racial equality into schools.

According to the Wildlife Center of Virginia the final voting percentage was:

It’s unfortunate that the voting was tampered with by computer hackers who dumped thousands of votes into the system. But, those unfair votes were identified and removed from the final tally.

Ruby, the Red-tailed Hawk, begins her new adventure now as a Wildlife Ambassador & Educator. She will be seen by tens of thousands of children and adults EVERY year.

She will join the Wildlife Center’s human staff in classrooms, at school assemblies, and other events throughout Virginia, to teach important environmental lessons and to help people see how we can be better friends to all wildlife.

And, as her name honors Ruby Bridges, she will also be a wonderful reminder to children of how one little girl’s bravery helped make an amazing difference in the work for civil rights and equality.

THANK YOU TEAM RUBY! Your passion and caring made the difference. Thank you for voting, for spreading the word, and for helping this amazing bird honor a very special Civil Rights Hero!