I’ll remind you in class from time to time that Yoga poses – asanas – are usually not as old as we think they are. And, while some instructional Yoga guides to asanas are a couple hundred years old, there aren’t any that are truly “ancient.”

As I mentioned in our Sun-Moon class on Monday, the Sun Salutation – Surya Namaskar – is probably only 100 years old or so. The Moon Salutation, Chandra Namaskar? Well, it’s younger than the Internet.

But, there’s nothing wrong with poses being young. They are born of the spirit of Yoga – which is ancient – and the knowledge of modern science, anatomy, and physiology. They are the perfect balance of old and young.

And, that’s what Yoga is, isn’t it? The balancing of energy – sun and moon, right and left, young and old.

Here are two poses for you to ponder. One old and one is so young it hasn’t been invented – yet. But, maybe you can help me with that.

Lilias Folan was one of the great teachers of Yoga in the United States. Her Yoga programs on PBS beginning in the late 1960s introduced thousands to the practice at a time when there weren’t many Yoga studios around.

During Wednesday’s heart opening class, we practiced Gormukhasana. It’s a wonderful way to open the shoulders and stretch the heart center.

So imagine my surprise to find it in a book by Lilias from 1972. The pose hasn’t changed. But, the name certainly has … 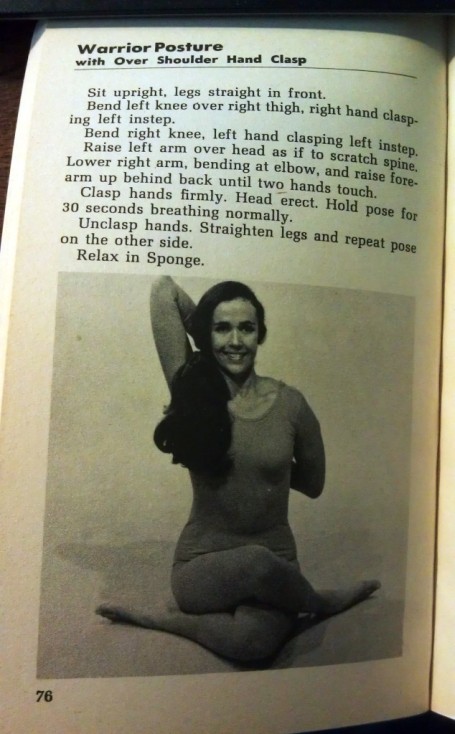 Any guess on what Sponge pose is? (I know the answer … we do it all the time and we call it something else entirely.)

California blogger Casey Karp writes about all sorts of things, including technology, the Bay Bridge, baseball, and cats. Every Friday he shares a photo of one – or some – of his cats doing … something.

Today, he featured Rhubarb, curled up and sleeping in what looks to me like a wonderful, brand-new Yoga pose. A pose that hasn’t been invented yet. 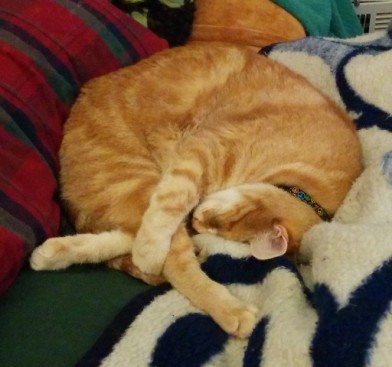 Photo of Rhubarb from koiscribblings.com Thanks Casey!

Check out the entire post for Casey’s description of the specific alignment Rhubarb is demonstrating: Read here.

Casey believes that cats get short-shrift in Yoga. He knows about Down Dogs, but he doesn’t know about cat tilts … cat-grabs-its-tail … lion pose … tiger in the grass.

I told Casey if anyone could turn his cat’s photo into a Yoga pose – Rhubarbasana, of course – it would be us. Take a look and see what you think.

If you want to share your thoughts on how to make Rhubarbasana come alive on the mat, let me know or comment below.  Or, maybe we’ll invent something new on Monday!

(And, a Friday treat for you. Here’s the Heart Sutra from Wednesday’s Savasana.)

YOGA WITH JACKIE THIS WEEK

Summer 2021: Peaceful Hands Yoga has reopened for in-person classes on a limited basis with covid safeguards in place. Fully vaccinated individuals may attend studio classes. For the limited schedule for in-studio and in the park classes, pricing, and other info, please contact: jackie@peacefulhands.com